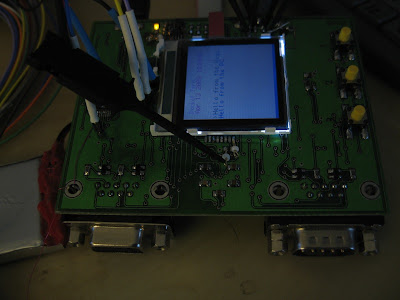 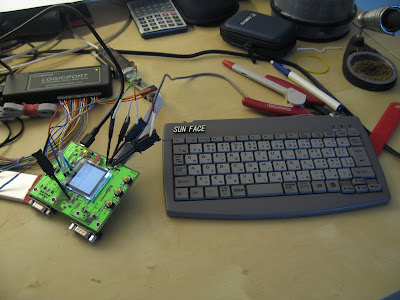 I started this project in 2006 while I was living in Japan with an idea to enter it in the 2006 AVR competition. Some things went astray with the hardware design so I dumped it in order to do five other more viable entries. The concept for the project was to take my Quickcoms Renasas design from 2005 and develop it further from the prototype. I mostly wanted to add keyboard support so it could act as stand alone terminal in addition to just decoding serial data. I also wanted it to be the size of a deck of cards and support a LiION battery. I wanted to enlarge the LCD to get closer to 80×40 chars on screen. Include support for a couple of LCDs on the PCBs to allow for a black and white low power version.

What went wrong ( other than trying to put the moon on a stick) ?

Where is it at now?

Well after sorting out the keyboard issue and replacing the LCD I have a small screen that will echo characters from the PS2 keyboard and from PC via a USB serial port. What needs to happen next is sorting out a positive and negative voltage rail to support the multiplexers and opamps. Once that is done I can start porting the code from the original system over to the AVR.

After that is complete I can add the extra features such as logging to the screen, save and replay sessions, and saved macros.

After that there is the case (already partially designed) and publishing documentation of the project for the website.